I have been doing some market days lately, where I've had a stand. The first was in June, and it was kind of scary since I have never done anything like it before. My husband also made some wood work to put there - it was on such a short notice that I just had to gather whatever I had and go from there. Since my arm and hand has been partially "out of function" since Easter, I couldn't really sit down and draw all day either, as it would have worsened my condition.

First thing happening was the day before the market day though, after I had managed to gather a bunch and took this picture I put out on social media hoping to pick up some interest. 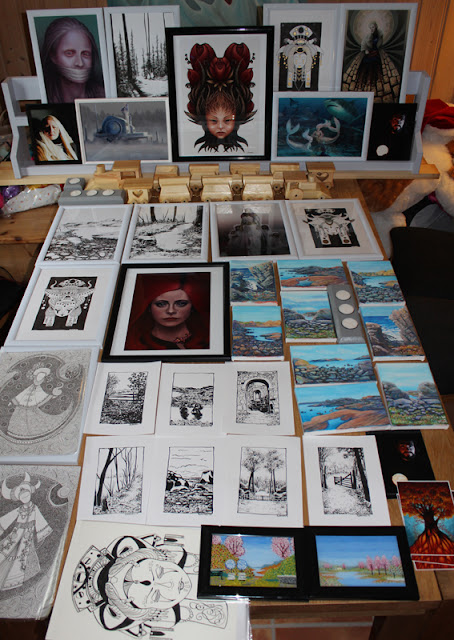 People started to show interest and buy right away online - so that was a good start. I did also post it in some groups locally also adding some very cheap used kids clothing hoping that might get some people into the stand and to fill it up, basically.

The day started off ok, we didn't panic too much - but then the rain set it. And it rained. And it rained. Thankfully we got ourselves some walls for the stand when we looked at the weather report and realised what was gonna happen. We had to put the drawings, paintings and prints in the back of it to save it from being drenched, and we had to take a lot of wood stuff off the ground.

I did however have great fun. There were people dropping by, talking to me, talking about art, and in general when it was not pouring I did get interest.With the sales the stand paid for itself, and I had gotten more local contacts. The clothes thing was a bust though, there was brand new clothes sold for silly prices at the stores around.This is a photo of my stand with a rather scary lady bug in it. 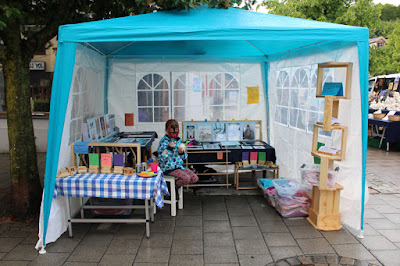 Then I did another one in the beginning of July, a happening once a summer that is called "night town" where all stores are open until midnight, there's shows, stands, entertainment, record tries, etc. Most stores here (we're in a town, not a big city) close between 4 and 6 pm, unless they're in a shopping mall (then they usually close at 8), and some bigger outlets sometimes have open until 8 pm. (We're not talking about food stores now.)

There was a throng of people and the weather was nicer - even if there was a couple of drizzles. The stand cost more to have there, but I was hoping it would at least pay itself like last time. Also, I had found out that knitting didn't hurt my arm, and I brought some of the random stuff I had knitted. Again I had lots of interested people to talk about art, but the two groups I drew most were kids loving my knitted octopuses and the monsters with cages my husband made for them and old ladies marvelling over how I knit whatever comes out of my brain without a pattern. Since I knitted a bit while I sat there as well, that might've have helped, I guess. This is a picture of the stand early on, it didn't take long before we put up a back wall and half one on the side, but it was more open and people seemed to like that. 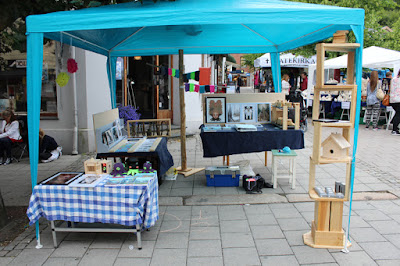 The sales weren't too good on the night town, it was clearly the wrong crowd for me, even if I got quite a bit of interest. It seems that people for the main part were walking around looking around for the insane sales, some of them updating hourly. I did however sell my most pricey painting late at night, and I know it went to a collector that has her "own" steady framer, so that was a bit of a boost after not too many sales earlier.

All the interest, and being able to talk art with all these people has been a wonderful experience. I don't know if I'll do anything like "night town" again since it costs a bit to put up a stand and the sales might not come, but I am going to Lågendalsmarkedet (a market on a large farm) late in August, where there will be two days of auctions, flea markets, entertainment, music and stands. Any sales there will go directly into the plus account, and I know a couple people there at least, so I am looking forward to that. And I am knitting monsters and trying to do the occasional drawing since my arm and hand is getting better. I will also try to found out if the more fantasy and sci-fi part of my stuff might fit into Banzai Con hosted locally next year if they have anything like stands or if it's just a gathering with entertainment.

Anyway, it's been fun experiences, I'll do some of it again, and it has made me realise that I might be able to sell some of my stuff online since people asked about that. Some ladies even mentioned that you can sell knitting patterns, so maybe I should look into that too, hehe.

As I were picking out stuff for the stands I realised this blog is horribly outdated, so I am going to post some of what I have been selling the next days.
Posted by Sorknes at 15:21