Photostudy - Rain; How to deal with drawing my kid

This might be a lot to read compared to my earlier posts, but I kind of want to get this off my chest, and if I am lucky it might help others. Don't worry, there's an image at the end - you can skip the text if you want. ;)

Alright, first of all. I have a kid, she's currently three, and her name is Rain. From she was born, I have been trying to draw her, make studies and sketches - both because I wanted to capture the moments as well as getting better at drawing. I ran into a problem. I couldn't do it. First I just thought it was the hormones running utterly wild, as I would end up just staring at her with tears in my eyes being extremely happy and feeling all LOVE. As you might know, it's kind of hard to draw when your eyes are misty.

Then, as she got older, I would still get that silly "oh my goodness, is that perfect little person there actually my child", "I am the happiest person in the world" and "did I help her getting into this world?" moments whenever I sat down to study her- but I ran into another problem as well. I see her every day, I love her, I spend a lot of my time looking into her face and watching her run around... And I could NOT get sketches that I felt represented how she looks, how her face acts - in other words, I would not recognize her in my sketches, and I ended up being utterly disgusted by my tries.

When using other family members as reference I've never ran into this problem, usually because I haven't been trying to make portraits of them but rather used them as base for some kind of character in my mind. Which means whatever changes in the faces happen is just good, interesting and happy accidents. Actually, I am most of the time even TRYING to change features in their faces using several references to make up new persons.

So. When I started this picture, my main goal in this was to get down light and colours.. Then I decided to up the ante and do one of Rain, tackling two things at once. I had to tell myself several times, that this one I could use as much time on as I wanted - also, I could focus on main goal, trying to push the fact that it is my daughter a little back.

After a few tries on the face, I was starting to get utter disgusted with my incapability of rendering her likeness again, and I made a decision to paint over some rough lines of her face from the photo and then go from there. And suddenly I could go forward.  Some of you might this was cheating, but to be honestly, I could not care less. I am my own client on this image, I have not put any restraints on my freelance me, and in the end the important here was that I learned something about colour and light. And I did.

There was some great surprises during this one, like how dark colours her face actually had to have to make it right. And how light colours I needed to get the proper "edge" between the shadow and light areas. And I learned tons from it. And the most important part, this is the first picture I have done where I'm trying to portrait my kid and actually showing it to anyone. If a two minute rough paintover managed to help me do that, it was worth it, when I think about how many hours I've actually used on this one. (Yes, I am still very slow, and I know it.)

I hope you enjoy the picture, because I am very proud of it. Not only because I managed to nail some colours and light that was hard for me and that I managed to paint my kid, but also because I am showing off my little Rain. I think she is adorable. :) I might try to fix more on it later, but for now it is finished. :) 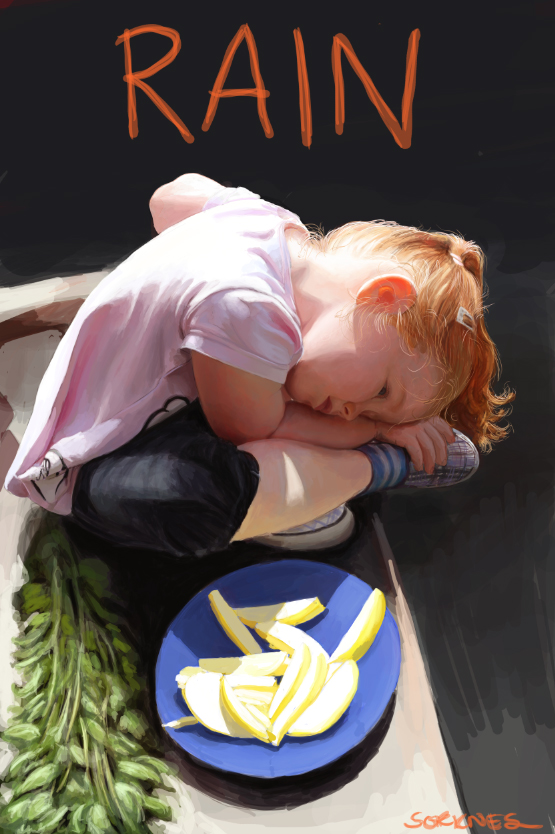 So, last week I went to a concert where Maria, a wonderful singer and former coworker, moved my heart - and made me awe a bit when it came to light and shadows. :)

After having some stress pouring out of from listening, I decided I wanted to try to capture some of the way that light changed everything on stage, in my own way.

And here's the result, not your usual Sorknes stuff. :) 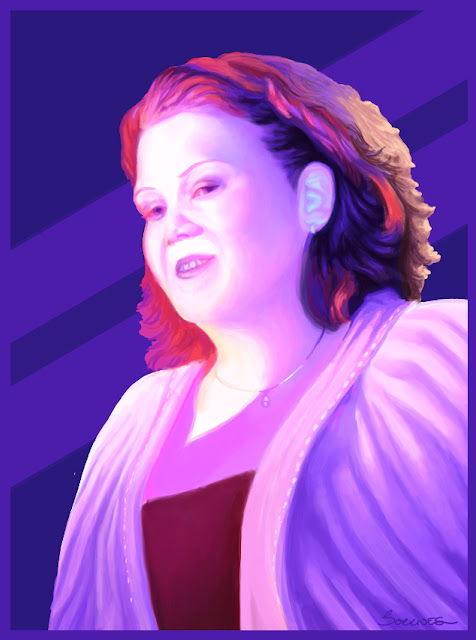