First, a birthday gift for a friend of mine. I had to stop due to the light, but I might get some time fix a couple of things on it tomorrow before I give it away, but I thought I'd post it anyway. I can post it again if I get more done. 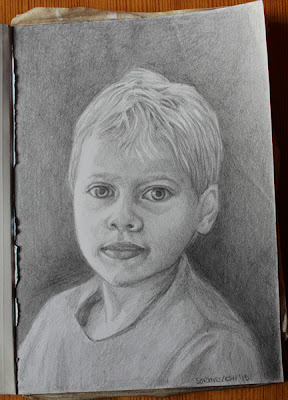 Also, here is the final that I did the for the Anatomicae challenge, Fire and Ice. I didn't have any more time to use on it, and to be honest, I've spent too much time on it anyway, hehe. 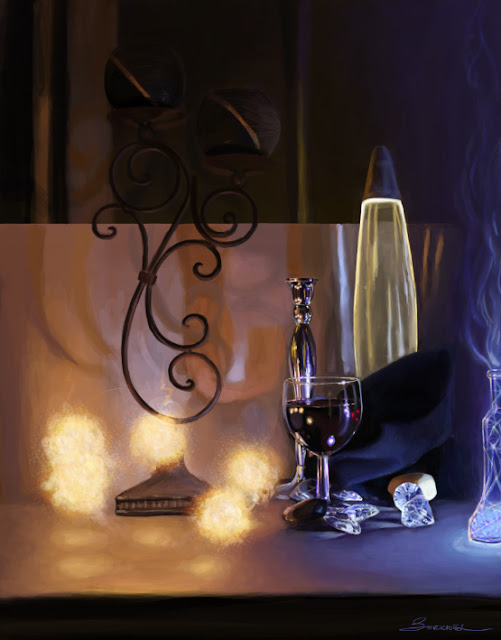 Aaand here is a rather hopeless dive into the coloured pencils again... ;) For some reason I cannot manage to take a proper picture of it though, so it looks even weirder as a photo... It might be that there's too much "stuff" there, and that the paper has been acting up a bit since I kept adding more... So that it shines in weird places no matter what. Anyway, it also isn't THAT colourful when looking at it in real life, I don't know if that's a good or a bad thing... :P

So, the current Anatomicae over at CGHUB has an extension. Maybe I will try to finish this thing anyway then. I think I might have been a bit over- ambitious, I wanted to do a tricky one with reflections, but I kinda forgot all the other stuff that would come into play (like, oh man, the shadows... the SHADOWS!), hehe...

I didn't post earlier since I was pretty sure I'd not finish this in time, but I might have time tomorrow to try to finish this thing. I've already spent more time than I should on this image, the tricky thing, it's starting to become a power struggle. :P I think I might have to do something else than what I had in mind for the warm light source, we'll see.

So this is where it's currently at: 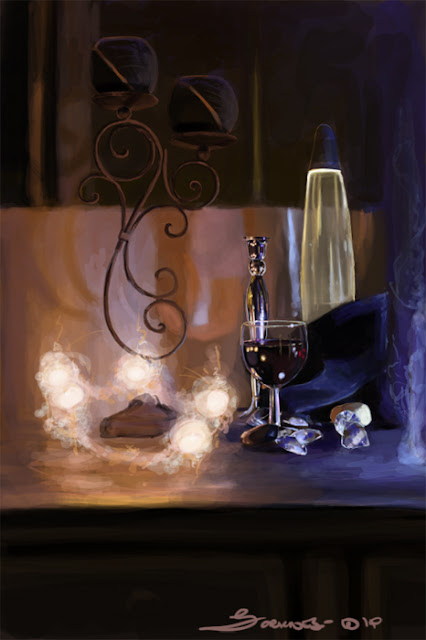 And here's the earlier progress: 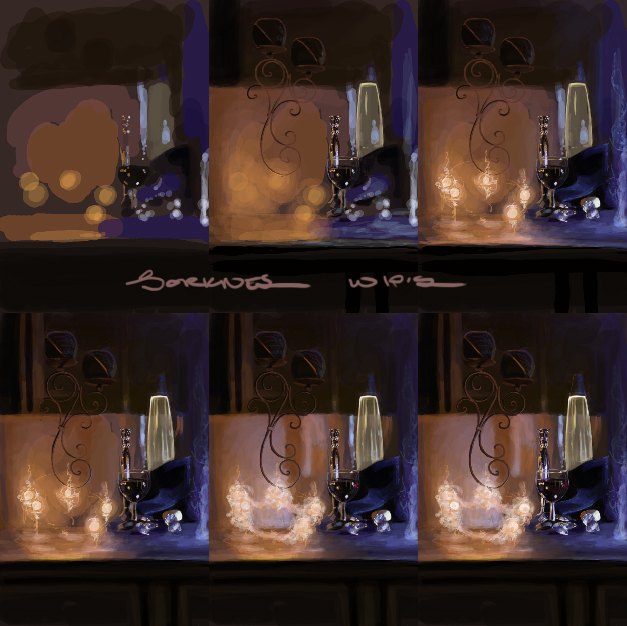 I had tons of fun earlier today mixing pencils, ink and coloured pencils. Which is funny, because I used to - well, not hate... but not exactly like... - coloured pencils. I have been thinking a bit on how fun I am having doing the traditional stuff lately, and I have come to the conclusion that I used to be really unsure about my work earlier. I would get to a point where I would not dare do anything else on an image, because I was afraid of ruining it. I seem to have lost that feeling and way to work. I think this is one part being more secure on what I am doing (also on fundamentals), one part having played a lot around digitally and now wanting to do the same traditionally, and one part finally getting rid of the "everything I do have to be for a reason to get better, and I need to able to show it off". In other words; I used to feel that if I screwed up it was a wasted effort. Now I realise I learned something anyway. :)

Here's three of the ones I did that I took photos of before the evening fell. There's more, but there's no good light here to take a photo, and the blitz makes more shine than showing anything. :) 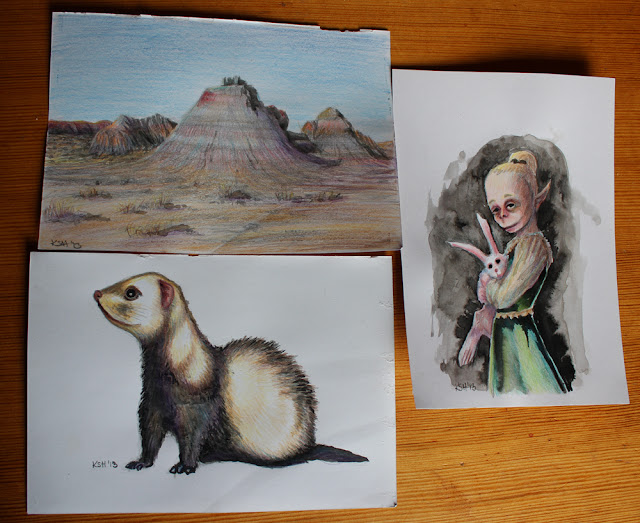 This one is just me... doing stuff. And not really thinking about it. :D 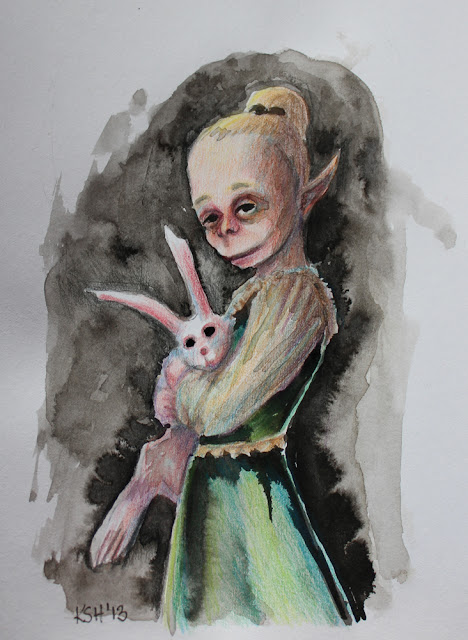 This I made after rediscovering some pictures from our honeymoon, we did a trip to the petrified forest. I also have a ton of photos from grand canyon, so I guess I'll have a go at that later. :) 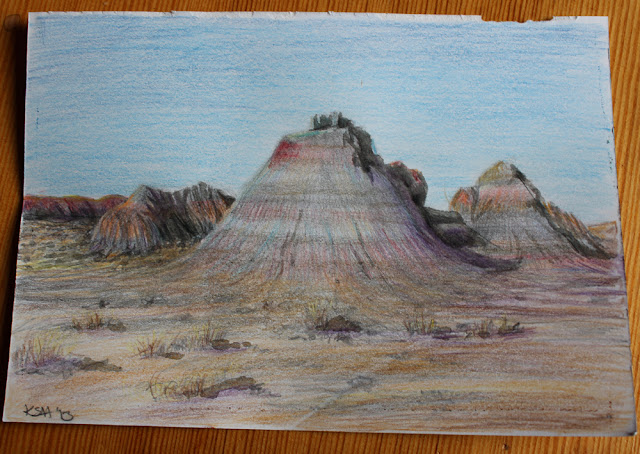 And this is a ferret. It was very fun, kid have this thing with a small, small picture of a ferret on it, and I found the shape nice, so I did the shapes, and went from there. :) 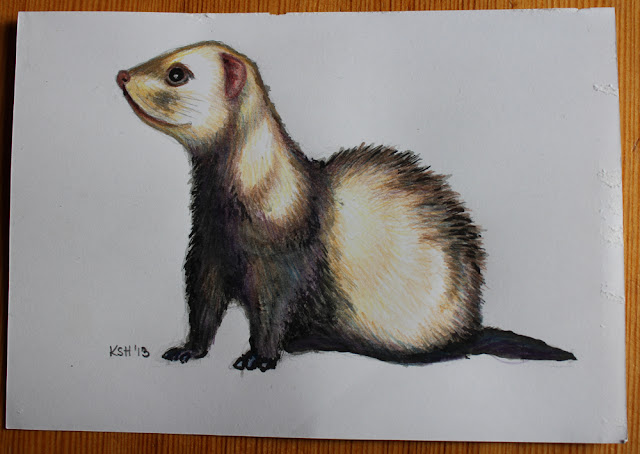 And as the light grew worse, I've done a bit more digitally on the kid that I posted earlier. I have to make sure it doesn't look like the kid that I took the photos of, since I have no permission from the parents, I took the photos myself during a birthday, but I think I'm still managing to pull it off somewhat. I have however done the hands twice now and deleted them. You see, I was so clear on what she was supposed to be looking at there, but I kind of forgot... and didn't write it down. So now I'm trying to remember. Ops. Hopefully you can see that I have progressed on it. :) 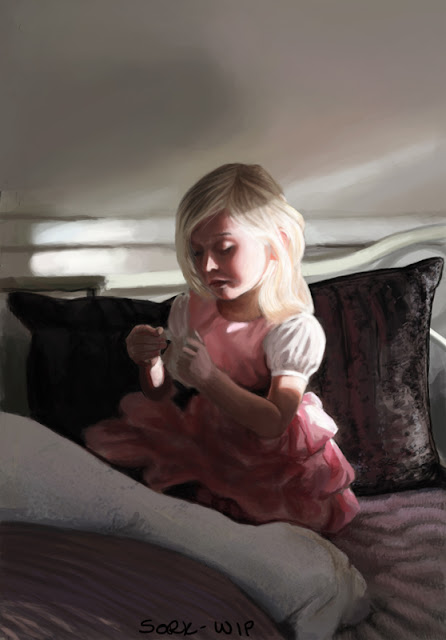 Got a kid that's home sick, and yesterday we were having fun painting with watercolors. I made this one on a whim, used about one minute on it, and she meant it was good enough to take a photo of, so I had to, haha.

Guess it's a lesson to myself that even if I have just a minute to do something artsy, I can get something out of it. :D 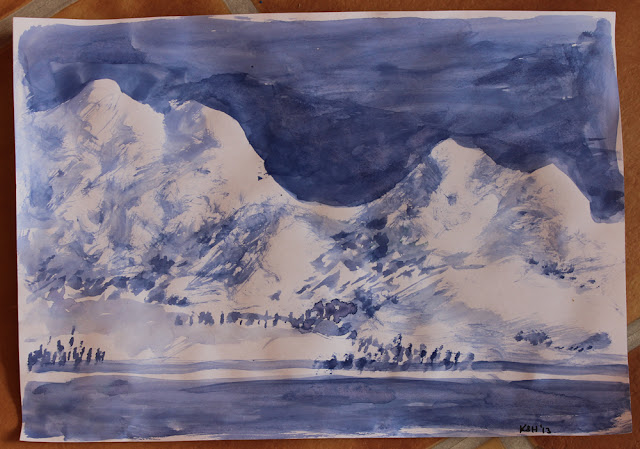 Back to the digital for a little while, even if I got myself some nice new paper - more traditional this weekend, I'd guess.

Anyway, here's an image where I am working on some photo refs I took myself during a birthday party for kids the other day, I prefer to take my own photos so I can focus on the things that I need to learn the most, and took a friggin ton that day. This is turning out pretty pink to be me, I am surprised. ;) 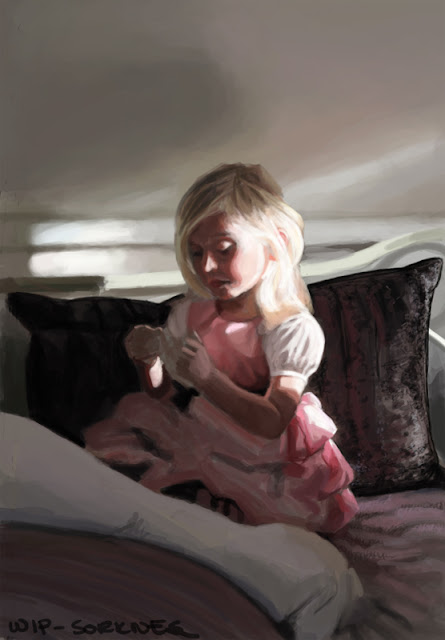 Also, here's some of my progress shots, currently "keeping an eye" on myself trying to find out where and when I am sidetracking too much so I can try to better my process. 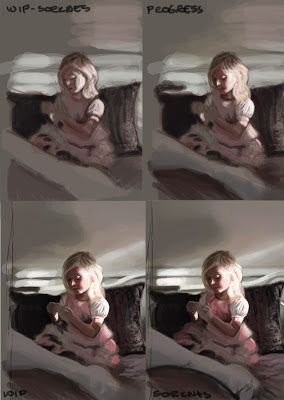 Yeah, so one evening I decided to paint with... coffee. Blasphemer, you think. Yeah, I'm sure there's people out there that would've loved having the substances I made in an IV drip.... Well, anyway, it was fun and I did some more the day after, as they were a bit "light" in the color from the evening before. Was a fun experiment, I might do some more of this. I just need some more paper and tape it down next time, I'd totally forgot about the warping, hehe. 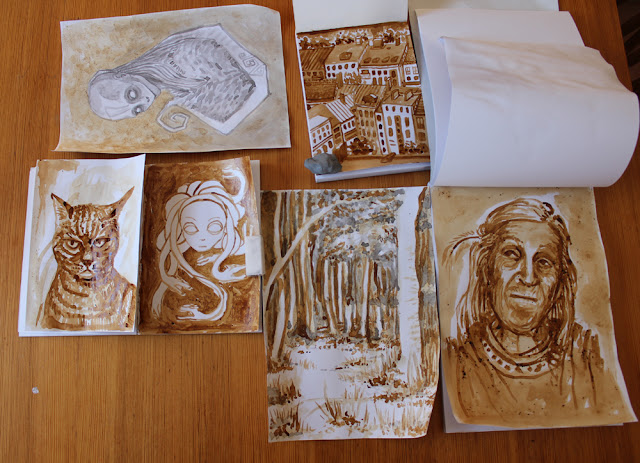 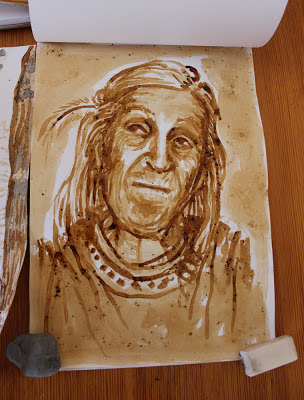 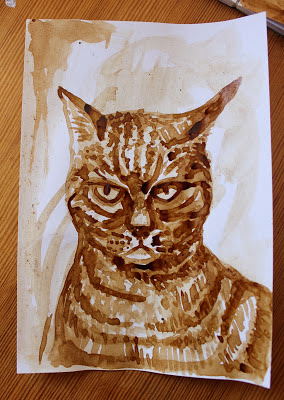 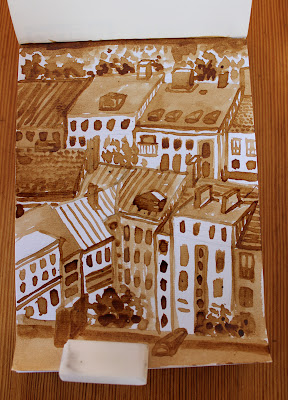