I actually made a final

I didn't think I'd do this when I started working on this picture again last night, but I have in fact turned in a final.

Totally ran out of time, but I decided I wanted to turn it in. For my own sake. I do not know if I might've been a little late in the posting though, I did post an earlier version earlier today just to be sure, we'll see.

Anyways. Here it is. Click on it to see it in bigger version. 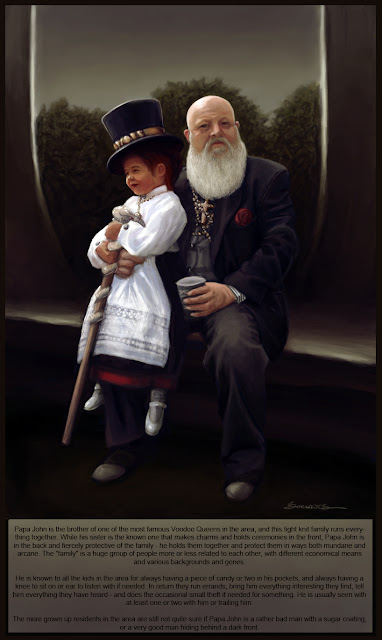 The text, just in case you can't read it:

Papa John is the brother of one of the most famous Voodoo Queens in the area, and this tight knit family runs everything together. While his sister is the known one that makes charms and holds ceremonies in the front, Papa John is in the back and fiercely protective of the family - he holds them together and protect them in ways both mundane and arcane. The "family" is a huge group of people more or less related to each other, with different economical means and various backgrounds and genes.

He is known to all the kids in the area for always having a piece of candy or two in his pockets, and always having a knee to sit on or ear to listen with if needed. In return they run errands, bring him everything interesting they find, tell him everything they have heard - and does the occasional small theft if needed for something. He is usually seen with at least one or two with him or trailing him.

The more grown up residents in the area are still not quite sure if Papa John is a rather bad man with a sugar coating, or a very good man hiding behind a dark front.
Posted by Sorknes at 15:26 No comments:

Yes, I love Bob Ross. I wish I had him as I grew up and didn't discover him as a grown up. Heh.

I think I just might have hit something. Like, it's accidentally good-ish. Maybe I'll manage to finish after all? 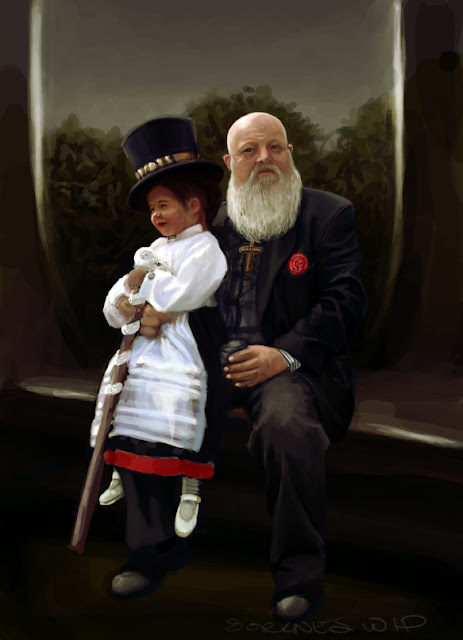 Been some busy weeks. To say it that way.

First, I lost my mother-in-law quite unexpectedly, even though she has been ill, it was a surprise that she would leave this world. The fact that she lived in US (as the rest of my husbands family) and we in Norway complicated matters, and we did not get to the memorial. She was a true free spirit, and she's made quite the impression on my kid even though they never met in real life. It was our hope that we would get to US or she and her husband to Norway pretty soon so they could meet, I am sure they'd hit it big time, and connect instantly.

Then my grandfather got ill, and after we had taken turns sitting next to his bed night and day for over eight days, he went quietly with several of us with him as he left last Saturday. He managed to get 99, he'd been 100 in September. My grandmother went in January before she managed to hit 99, so they didn't stay long apart.

So, to say it this way, I've not had time for the challenge.

I started on it again today though, because I like the picture ideas in my head, even though they're pretty far from what I have on "paper" at the moment. For some reason I thought the deadline was the 5th and not today. I won't manage before the deadline, but it doesn't matter, I think I'll finish it anyway. 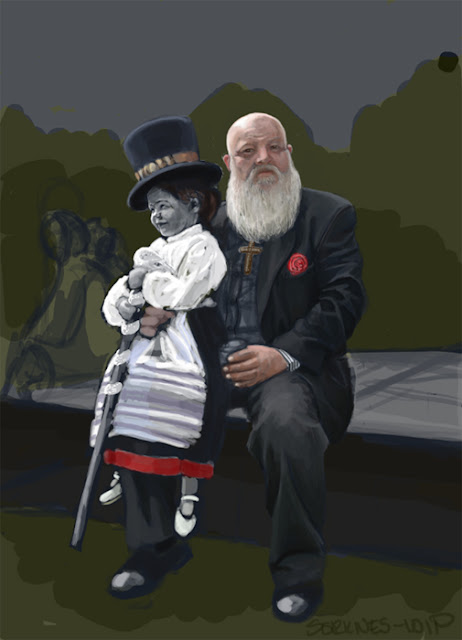 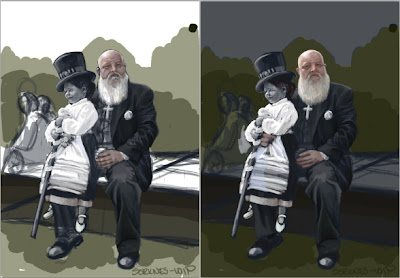