And now for something completely different!

Bear and butterfly, done for a lottery/tombola at my daughters kindergarten. Hopefully the kid who gets it will like and not be scared by it. Which is why I made it smile. Without teeth. :) So, there's still a bunch of things to cope with. Together with the family that has shrunk substantially since New Years Eve due to deaths, there is a lot going on with other things in life as well. And I have to do a lot of changes to get where I want to be within the next five or ten years. It's a mental struggle to change my way of thinking, but I am working hard at it. Some times it feels like I am standing as a point in a shield wall or an officer urging the rest of myself to get on with it, other times it feels like I am not putting up a struggle at all, I am just letting whatever steamroll over me.

I am sure this is something a lot of people can recognize themselves in. My way to cope with it is to get some of it out on "canvas". This is partly a yell against myself, as well as a yell against the female standards that I see everywhere - using myself as a model for both reasons.

Still on the basics on this, it might change a lot or it might not - it's changed quite a bit already. But it's rather therapeutic which is the most important. It's what I use my drawing for, after all. :)

Whenever I get the essence of what I want on this image, I am going to try to get it on "real" canvas. But I feel better dealing with the early stages of the painting digitally, as I feel there's a bit more freedom when it comes to change things totally around. 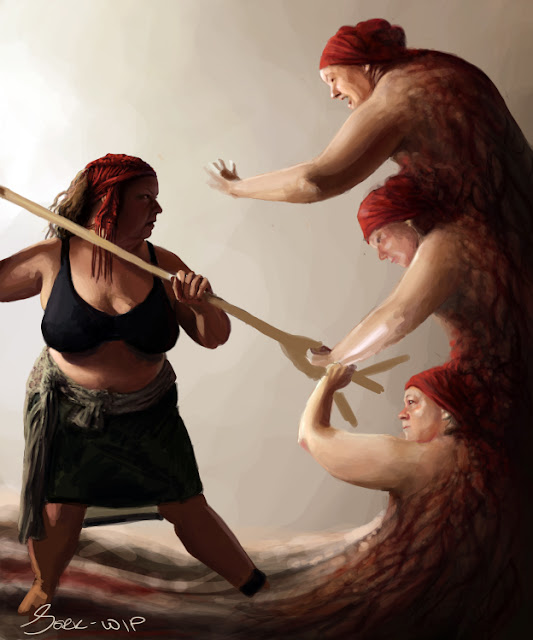